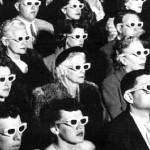 How long has 3-D technology been around?  Most of us might think of crowds of teenagers in a 1950’s movie house watching horror flicks like “Bwana Devil” in 3-D.  But 3-D technology, or stereoscopy as its technically called, made its debut on the scene in 1838 with the first stereoscope.  And the first actual 3-D movie was a 1903 film called “Le Arivee d’un Train,” which, in typical 3-D cinematic style, had a head-on shot of the arrival of the train followed directly by passengers heading directly toward the camera.

Despite this lengthy history, the technology has remained based on one simple principal – to make 3-D effects you must find a way to project two slightly different pictures to each eye.  Modern 3-D technology works by rapidly flickering two versions of the movie and projecting them onto each eye.  The brain does the rest of the work, melding the two images together into one and giving the show the appearance of depth, the third dimension.  But does this exposure, especially long exposures, cause harm to the developing child’s brain and visual perception system?

Unfortunately, long-term studies on new flicker digital 3-D technology and children aren’t yet available.  We do not know for certain if regular or daily 3-D viewing over years affects the developing visual system, although older 3-D methods essentially do the same thing and are not considered harmful.

The question of potential harm in modern 3-D use in TV is really based on two factors: the amount of time children will now be watching 3-D TV each day and the sensitivity some individuals show in reaction to 3-D viewing.  3-D viewing “tricks” the brain into perceiving depth images from the TV or movie screen when the images are actually two dimensional.  After a long period of exposure, say through a 90 minute movie, some people report eye strain, sensitivity to depth cues, motion discomfort, and similar effects.  Some of these effects can be attributed to artificial 3-D viewing based on the difference between what the eyes do in “real life” 3-D situations versus TV 3-D viewing.  Some children are particularly sensitive to this effect and show more discomfort than others, and others must use caution because of pre-existing seizure conditions.  These eye strain and motion effects are generally short-term, and TV manufacturers suggest dealing with them by taking breaks and only viewing for short periods of time.  It is difficult to conduct actual lab studies of longer term 3-D viewing in children because of the potential harm of the experiment.  Researchers will have to wait until 3-D TV technology is already in the marketplace for a number of years, then survey heavy 3-D TV watchers and compare them with non-watchers.

With a 3-D television technology in the home, we will soon be able to answer the question of whether or not longer and more frequent periods of 3-D exposure cause more than temporary changes in the visual system.   We may find that the bigger problem is the introduction of a new technology that leads to even more time on the couch rather than playing outdoors.