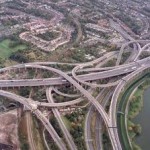 Findings of a new study conducted by autism researchers at the Saban Research Institute at the Children’s Hospital of Los Angeles have created a buzz in the autism community.  Their study has found that children born to parents living near major freeways are twice as likely to have an autism spectrum disorder compared to children who do not live near the freeway.  The study examined 304 children with a diagnosis of an autistic condition and 259 children without the diagnosis.  The findings were strikingly significant and open up many more possibilities for study into the causes of the autistic spectrum disorders.

The study may help us partially why there has been such a substantial rise in cases of autism over the past decade.  The autistic spectrum represents a number of similar neurobiological conditions that have some of the same basic features: a difficulty understanding or engaging in social exchange, problems with repetitive thoughts or behaviors, and problems in speech or communication.  In addition, many autistic individuals have a different experience of the sensory world and may have trouble coping with typical sensory experiences such as noises, textures, or temperature.   Up to this point, one single cause for autism has not been found, and researchers suspect that the disorders may be due to a combination of genetic and environmental influences.

What does the autism freeway study really tell us, and should we be moving “off the beaten path” if we are thinking of carrying a baby and we live near the freeway?  Don’t call your old college friends who still help you move just yet, because there are a few painfully slow scientific things that have to take place.  First, the study has to be replicated, that is, repeated studies have to measure the effect to make sure it is a real one.  This is just how good science works.

Second, it will take some time to dissect the tangle of environmental factors that are actually causing the increase in “freeway related autism”.  Is it the carbon monoxide, the noise, the soup of airborne molecules that hover around the freeways?  Is it the stress during pregnancy of living the urban lifestyle?  Coming to hard and fast conclusions will take some time, and we remember that children can be born with the predisposition for autism wherever they live.   The study does give us more evidence that there is an environmental influence on autism occurrence, and that in the future, pregnancy planning might also include figuring out the safest place to stake our tent.