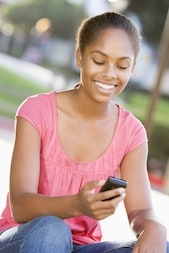 So many teenagers the country over have cell phones. Either theyíre talking on them constantly or using text messaging to communicate with friends. While you want them to be able to stay in contact with friends, you probably also want them to stop spending so much time on their cell phones.

There are a number of good reasons why teens need to stop using their cell phones and itís not merely because Mom and Dad tell them to. In fact, ongoing research concerning cell phone usage has proven how these phones can actually be hazardous to your health.

You may have heard the stories going around the internet that says using cell phones could result in brain damage. There isn’t any hard proof of this but there are some other studies that indicate spending too much time with a cell phone to your ear could disrupt a teenager’s sleep.

The report conducted in Europe states that over usage can result in causing teens to have problems falling asleep and often wake up during the night. Teens that don’t use their cell phones as much don’t have the same sleep problems. Apparently the problems are the same whether teens are talking on the phone or text messaging.

Another report conducted on teens links cell phones with anxiety. Many teens, especially the heavy users, leave their phone on all night long. They want to be available for their friends should they need to call. Unfortunately, they are causing themselves health problems. Experts recommend that teens leave the phone off for a good part of the day to help bring their sleep patterns back into line.

Costs for using the cell phone is another reason to stop the cell phone war you may be waging against your teen. Most teens want to customize their phones with a special ring tone. If your teen can change the ring tone on their phone, you may be surprised to find heavy charges for them when the bill comes in.

With the various reports indicating the potential dangers for teens that use cell phones in excess, you may want to change their plan so that they have limitations placed on them. You can authorize only certain telephone numbers. You may also want to place other restrictions on their usage.

Health experts agree that cell phones are alright for occasional use but teens spend way too much time on them. You want to know how to stop the cell phone wars? Explain to your teen the health issues and explain that there will be some changes and what those changes will be. Then stick to your plans regardless how much they fuss and fight.